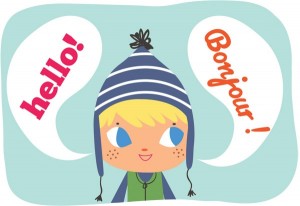 “Are you hungry? Est-ce que tu veux une apple?” These sentences are example of sentences that parents in Montreal might say to their infants. When parents know more than one language, they have the opportunity and ability to combine their languages into a single sentence or switch which language they are speaking between sentences. This is called code-switching. This type of speech, however, may present unique challenges to a child who is learning multiple languages. For bilingual infants, code-switching may be difficult to predict, and it could present difficulties in understanding which language is being spoken. Capitalizing on an existing dataset of daylong home recordings of bilingual families, this project will look at code switching in bilingual parents’ speech in an effort to further understand the language that bilingual infants in Montreal hear and learn from.

In an environment where people speak multiple languages, it is common for those languages to be mixed together in everyday speech. This …
LV Kremin, AJ Orena, L Polka, K Byers-Heinlein
PDF Project